Realizing I won’t be returning to a college campus next fall has left me nostalgic.

A couple of weeks ago I received a call to confirm my reservation from the restaurant where we planned to have dinner following my son’s college graduation. After hanging up, I started to add the number to my contact’s list on my cell phone. But then I stopped because it hit me that I didn’t need this info anymore. I wouldn’t be visiting this city again.

With my youngest now graduated from college, I’ve been thinking about all the things I’m losing because he’s done.

Note: My two kids attended the same college, so I spent six years connected to one university. Letting go is hard because I’ve come to love this college almost as much as I do my alma mater.

The end of the academic calendar After returning home following his graduation, my son removed the large postcard with his college’s academic calendar from our refrigerator. August won’t be a time to gear up for the “new year” anymore, or to help my kids pack up to return to campus. In May, no one will be “home for the summer,” leaving shoes to trip over, coming-and-going at random hours and raising my grocery and utility bills for three months.

The phrases Thanksgiving Break, Winter Break and Spring Break no longer need to be part of my vocabulary. Nor do I need to help anyone figure out flights home and back to campus during the busy holiday season.

I won’t miss hearing the stress in their voices during finals week, which means I can put all the cardboard boxes I’ve saved for care packages into the recycling bin. I wonder if the man at the UPS store will wonder where I’ve gone?

On the bright side, I can skip marking tuition due dates on my calendar. 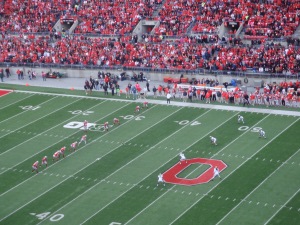 New travel plans In late August, no one will need help from my husband and me to move into a dorm room or a new off-campus apartment. October won’t find us walking around campus as the leaves change, or sitting in the stadium stands with 100,000 other people watching a college football game. The New Year will actually begin on January 1 without us debating whether to risk a wintertime flight to campus in late February.

I really liked the city where they went to school, discovering its restaurants, galleries, boutiques, etc. Not having a reason to visit anymore makes me sad.

No more down time I enjoyed when my kids came home for holiday breaks and slept in every morning while I worked in my home-office. After they woke up, I turned away from the computer and we talked in-person about whatever was on their mind that day. I learned to listen better because it wasn’t so much my advice that they were looking for, but the chance to share more of their lives with me. With college done, I will no longer have this extended time with either of them.

Checking out of apps and social media My weather app doesn’t need to include their college town anymore, and I can stop following the Emergency Services Office on Twitter and the Parents’ page on Facebook. I don’t have a personal reason to care about what’s going on there now, but a part of me wishes I still did.

No more security in late night phone calls Strangely, with my kids at college, getting a call after midnight wasn’t nerve-wracking once I knew to expect it. Usually it was because that’s when they had time to talk. But with both of them graduated and working, hearing the phone ring in the first hours of a new day is likely to make my heart skip a beat again.

What I won’t miss Good riddance to tuition payments, calls from the airport about delayed or cancelled flights, the occasional bouts of homesickness and saying goodbye each time they headed back to college.

My husband and I are entering a new phase of our lives as parents and as a couple, reminiscent of when our daughter first headed to college. I’ll still visit campuses as part of my research for this blog, but probably not my kids’ alma mater.

If your children have graduated college, share what you miss about their college days in the comments section below.